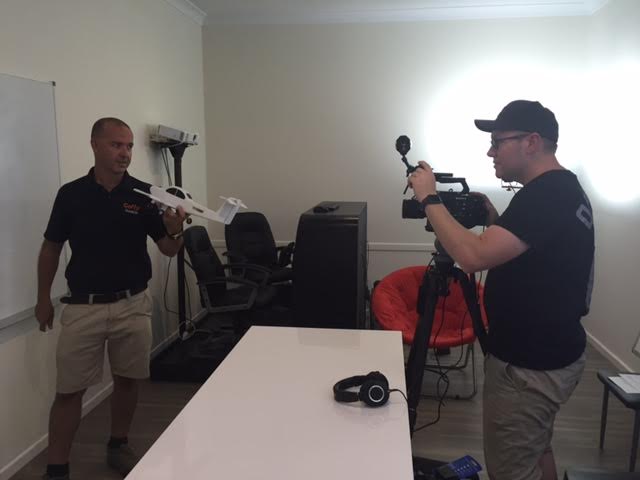 Being a Chief Pilot can be both rewarding and challenging. If we add to that the complexities of operating a small business it can feel like at times you are juggling ten bowling balls while riding a unicycle on a tightrope. Maybe I have exaggerated a tad, but I think you get the picture, it can be very challenging.

Of course I would never give it up because I love what I do. Last June my operations Manager Jeremy suggested we create a reality tv show on what it was like to Learn to fly and operate a flight school. I thought it was a brilliant idea but we were so busy I just could not see how we could have the time to create such a series and make it look professional enough to make it worth our while.(an that others would want to watch)

Maybe it was synchronicity or serendipity, but just one week later I received a call from Stephen Limkin, the owner the production company Light Studios, to see if I was interested in making a reality tv show on flight training. Ten years ago I would have fallen off my chair, but after operating a business for the last seven years these coincidences have been happening on a regular basis.

Being a Chief Pilot and business owner you have to deal with so many variables, weather, student motivation and maintenance in what is a highly competitive industry. Now the business had to deal with a film crew following them around all the time. Each of our aircraft was transformed into a flying movie studio.

Stephen as creative director is a perfectionist and we had to have four cameras with two microphone recording devices in each aircraft while flying. Did I also mention everything was shot with 4K cameras, that’s about four times better quality than normal high definition?

I thought our customers might be annoyed with camera crews following them around all day but the majority of customers loved it and were excited to be part of something special and unique.

Interestingly, I also got to see how each of the other GoFly Instructors interacted with real students in the air. When I do check flights with my Instructors, it is their CFI flying with them pretending to be a student, so of course they act differently with the CFI and owner.  It was refreshing and exciting to see the unrehearsed instructing for the first time, and fortunately,  I was very happy with what I witnessed.

What I love about the ‘Taking Flight’ series is that it reveals so much about what it is like to learn to fly; to be a flight instructor;and to operate a complex business such as a flying school. It also shows the human element, the fears and hopes and what it is like to stretch yourself mentally and emotionally.

The extra work involved creating this series has been well worth the effort and one of the biggest benefits of saying yes to assisting Light Studios with its creation, is getting to know Stephen the owner, Jared, the director of Photography  – and fostering these new friendships.

The first episode will be released on YouTube on Wednesday 15 March, with each subsequent episode released fortnightly. You can see the trailer here. There is also a website for Taking Flight where you can subscribe in order to be notified of each new episode; and a Facebook page.

My hope is that the Taking Flight series will inspire others to learn to fly;  or to start their own business; or to simply say YES to trying something different and exciting in their own lives.

Do you want to be notified each time we upload informative new content to this site? Just enter your email address below to subscribe and receive alerts.